Long Distance Bus from and to Berlin 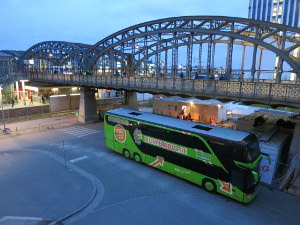 If you are planning on traveling from or to Berlin, long distance buses are the new big thing.

But we definitely recommend you taking the long distance bus.

So why are long distance buses the new best way of travelling for little money from and to Berlin?

Since a few years ago Deutsche Bahn, the German train company, lost her monopoly on long-distance transport.

This opened up the chance for new bus companies to start operating between the bigger cities in Germany.

That is why since this year you have more choices to travel from and to Berlin for little money.

As already mentioned traveling through Germany by bus is the big thing right now.

Even though the market is quite young it is already incredibly competitive.

A lot of new bus companies started operating and a few already had to close down because of the very low fares.

But from the new companies a few stand out by their level of service and the amount of connections they are offering.

Berlin is extremely lucky as most companies offer a wide selection of destinations from Berlin.

The central bus station called ZOB (which stands for Zentraler Omnibus Bahnhof) is conveniently located next to the Messe in West-Berlin.

But even if you are living in the east you can get there quite fast by getting the Ringbahn to Messe Nord/ICC.

Furthermore there are some very busy bus stations at Alexanderplatz and Südkreuz.

So no matter which area you live in you will never be too far away from the next long distance bus stop.

To buy your tickets you just need to go to one of the companies websites and search for the desired destination and date and that’s it.

The best company, which offers the best service and prices and drives to most destinations in Germany and Europe is Flixbus.

And if you have ever traveled with them you will definitely agree.

All buses are completely new and in very good shape.

Drinks and snacks can be bought during the drive and to pass some time you can use the free WLAN with your phone or laptop.

Flixbus even operates from several stations in Berlin.

One is, as mentioned before, the ZOB located close to Messe Nord/ICC and the other one is at Berlin Südkreuz, which is also easily accessible by public transport including the Ringbahn.

And if you live in Mitte or in Prenzlauer Berg the station at Alexanderplatz will be most convenient for you to get to.

You can buy tickets as well as checking for the connections and departure times online at  www.flixbus.de

Furthermore their website offers a FAQ on how much luggage you can take (which is usually on piece of hand luggage and 2x23kg of normal luggage) or how much in advance you have to be there before the bus leaves (which is around 15mins before departure).

If you are more spontaneous you can also just show up at the bus stations and get a ticket in the bus, but this is only if there are seats left.

Also you have to pay the full price instead of the mostly discounted internet prices.

So better go online and book a ticket on their website. And don’t forget to download your ticket on your Smartphone or print out the ticket.

In order to save some extra money on tickets there are two possible ways. First, book well in advance, as the cheapest seats are sold out very fast.

And second keep your eyes open for Flixbus vouchers or special deals in connection with e.g. LIDL.

Usually there are always some kind of vouchers or special deals on at the moment.

Is travelling by Fernbus better than by train?

The answer is it depends.

There are pros and cons for both types of travel, which we are going to compare now.

Clear winner: Fernbus! Travelling by bus is much cheaper than by train.

The shorter in advance you are booking the more it makes sense to travel by bus.

On long distance trips like Berlin to Munich you can easily pay 5x more by train than by bus.

Draw between buses and trains. You have to be aware that the seats on the buses offer less space than on the train.

Especially if the passenger in the seat in front of you decides to take a nap and to lower the seat you will have difficulties to use your computer on the bus.

Also in a bus you can’t just get up and walk around a bit. So in terms of space and comfort the train wins.

But the buses make up for that by offering free WLAN. It is still unbelievable that nowadays you won’t have the option to surf online while in a train, except you pay a lot of money or use your own mobile data.

Here buses stand out by offering free WLAN for all passengers which makes this point a draw between buses and trains.

Winner: Fernbus! Most of the time the bus stations are right next to the main train stations in Germany.

Of course this doesn’t apply to Berlin as the Hauptbahnhof is located in the middle of nowhere.

So especially if you are living in Prenzlauer Berg of Friedrichshain you will have a shorter commute to the ZOB than to the Hauptbahnhof.

Another reason why the Fernbusse win this point is that they don’t stop in every little city along the way.

Only if you are travelling a very long distance the buses are going to have a 30 mins break on the way in order change the driver and to give you the chance to walk around a bit.

Travelling by bus is a very good alternative to going by train.

If you have the choice between both options we strongly recommend to try out the buses.

You will save a lot of money and be more entertained with choosing a long distance bus for sure!