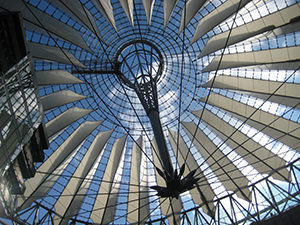 Whenever you watched a movie about the Cold War you could be sure that at least one scene was set in Berlin.

But in recent years many other movies discovered that Berlin is the perfect setting for other kind of stories as well.

So before you move to Berlin make sure to check out some of the movies on our list in order to get a felling for Berlin.

Also all of these movies are really cool ones that are worth watching not only because they are set in Berlin.

Berlin is a world famous party destination for Generation easyJet.

So it comes as no surprise that there had to be at least one cool movie about the techno scene in Berlin.

Starring top-DJ Paul Kalkbrenner, Berlin calling is about the DJ Ickarus (Paul Kalkbrenner) taking drugs in order to keep partying and making music for days until one day he has a breakdown and wakes up in hospital.

The soundtrack to Berlin calling is probably the best soundtrack of any German movie in a long time. Make sure to listen to it before going out to party 24h in Berlin.

Wim Wenders is one of the most famous directors in Germany. His masterpiece ‘Der Himmel über Berlin‘ is about two angels Damiel and Cassiel who are having an eye on Berlin.

But instead of being able to help people all they can do is watch them.

This problem of only being able to watch rather than help creates a big urge in Damiel.

He even would give up eternal life only so that he can take part in people’s lifes.

Lola rennt was the big artistic break through for Franka Potente.

Lola, played by Franka Potente, is a red head that is running through Berlin in order to stop her boyfriend from robbing a supermarket.

The best thing about Lola rennt is that you can see how Berlin looked like back in 1998 when the movie was shot.

But if you try to run the exact same route through Berlin you will see that they did not bother to make it 100% acurate.

Already on our list of the best books about Berlin, Wir Kinder vom Bahnhof Zoo, was turned into a movie in 1981.

Worst thing about this movie is that the story is the real life story of Christiane F. who is one of the underage kids that are selling their bodies in order to make enough money for their heroine-addiction.

So if you are expecting to watch a feel-good movie about Berlin then Wir Kinder vom Bahnhof Zoo is not for you.

If you are interested to see how the dark side of life in a big city can look like be prepared for some heavy stuff.

This movie is one of the most authentic ones about life in East Berlin and the hardships suffered by the people.

If you are not aligned with the party then you are most likely to get into trouble with the Easter German secret police called Stasi.

While other movies such as Good Bye, Lenin or Sonnenallee are comedies that take on a light approach, Das Leben der Anderen showed the dark sides of life in the GDR if you are not in favor of the party.

And by the way Das Leben der Anderen won the Oscar for Best Foreign Language Film in 2006, so you can really belive us that you must have seen this movie!

Described as a tragicomedy Good Bye, Lenin starring one of Germanys most famous actors Daniel Brühl, is the story about a lady that falls into a coma shortly before the wall comes down.

After several months in coma this lady awakens in the times after the fall of the Berlin wall.

As she was a true socialist her son and family fears that she might get a fatal shock once she realizes that the old GDR is to be gone soon.

So in order to ease her into the realization of the collaps of Socialism in Germany her family and especially her son try everything to pretend that the wall is still up.

This makes for some funny situations, believe us. A great movie for a relaxed evening.

Named after the famous street Sonnenallee in Neukölln, Sonnenallee is a funny comedy about the divided Berlin.

The movie focuses mainly on the culture and especially pop-music for the young generation in East Berlin.

Of course there is also a love-story involving a pretty girl called Miriam who is dating a West Berlin boy.

Not every movie that is set in Berlin has to do something with Berlin’s history. But we don’t want you to miss them, as it is always cool to recognize some of the areas shown in these movies.

Some other movies worth watching that are not really about Berlin but at least some of the scenes are set in Berlin are:

1. The Bourne Supremacy with Matt Damon

The famous Bourne trilogy chose that some of the scenes are set in Berlin.

The most iconic scene is set at Berlin Alexanderplatz, other locations in this movie of Berlin are the A115 (Avus) and the Funkturm.

Apart from being partly shot in Berlin the whole Bourne trilogy is a great watch.

In this movie Liam Neeson is on a biotechnology convention in Berlin.

The most iconic scene however is of the crash on Oberbaumbrücke (famous bridge connecting Friedrichshain und Kreuzberg).