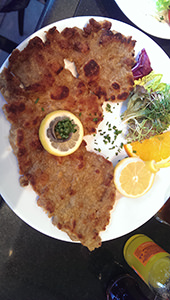 Are you looking for the best Schnitzel in Berlin? Well your search is over now, we have put together the best places in Berlin to eat a Schnitzel.

Be careful, that there is a huge difference between Wiener Schnitzel and Schnitzel Wiener Art.

Wiener Schnitzel is made from veal and the meat is coated with flour, eggs and bread crumbs before it is fried in butter.

Schnitzel Wiener Art is made of pig where else the way of preparation is exactly the same as for Wiener Schnitzel.

As you will notice most of our picks are Wiener Schnitzel, as this is the real deal in terms of taste.

Of course you can find many other places, where they sell Schnitzel Wiener Art for less than half of their prices, but believe us, it is not worth to be stingy there. 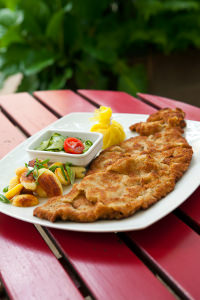 The Schnitzelei is our second pick for the best Schnitzel in Berlin. The quality of their food is fantastic, no matter which of the many variations of the dish Schnitzel you pick.

For the ones that prefer Schnitzel made of meat there are endless options including Wiener Schnitzel (our favorite), Schnitzel Wiener Art, Turkey-Schnitzel, Jägerschnitzel and many more.

In summer make sure to call in advance and make a reservation for their very cosy outside area. Where else can you enjoy a fantastic Wiener Schnitzel while the Spree is passing you by just a few meters away in Berlin? Exactly, almost nowhere else!

If you are around the Mitte area we have good news for you as well, as you will find a second Schnitzelei close to Torstrasse.

And best of all, if you happen feel like having a Schnitzel on a Sunday, Schnitzelei offers you a huge discount on their Wiener Schnitzel as it is Schnitzeltag 🙂

Some of the best news in recent months was the opening of Brot und Salz in Prenzlauer Berg.

As you might have noticed already there is a real shortage of very good German/Austrian restaurants in Berlin.

But now with Brot and Salz there is a place to go if you fancy some real traditional German cuisine.

And the best item on their menu is of course the Wiener Schnitzel.

We highly recommend to come to Brot und Salz very hungry as the Wiener Schnitzel portion is unbelievably big.

If you go for the big portion you will actually get 2 full Wiener Schnitzel.

And let us tell you these 2 Schnitzels taste like a dream, the meat is tender and the crust is just perfect.

And if you dare we highly recommend the Kaiserschmarrn as a dessert.

Another great choice for one of the best Wiener Schnitzel is Alpenstück in Berlin Mitte.

The Wiener Schnitzel is accompanied by a very tasty potato and cucumber salad.

When you check their menu you will see only very few options to choose, but this means that they know how to prepare the meals offered.

And you will not be disappointed by the Wiener Schnitzel, which is not only very tasty but also enough even if you are very hungry.

Don’t be fooled by the name Spätzleclub. As you might now Spätzle are a Swabian type of egg-noodles and have nothing to do with Schnitzel.

Well not nothing, because they are a very famous side-dish when ordering a Schnitzel in the South of Germany.

Coming back to Spätzleclub, each Friday they turn into Schnitzelclub and serve some of the best Schnitzels in Berlin to many hungry businessmen.

And best of all they offer Schnitzel Wiener art (pork) and Wiener Schnitzel (veal) with a side of delicious Spätzle. Make sure to pay one Euro extra and get Käsespätzle instead of just plain Spätzle. 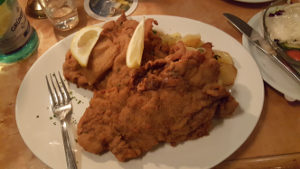 Max und Moritz, located at Moritzplatz Kreuzberg, is one of the most iconic German restaurants in Berlin.

First of all the location is just awesome with a great nicely decorated eating hall in the back and a cozy Wirtshaus-like feel in the front of the restaurant.

And best of all they offer all the great German dishes such as Schnitzel and Rouladen.

But as we are talking about the best Schnitzels here you can guess what is our recommendation for you – exactly.

You should definitely order their enourmos and amazing Wiener Schnitzel, you will not regret it!

If you are on a tight budget you should consider not going to Brechts for a Wiener Schnitzel.

But for a special occassion there are few places that offer a better combination of fantastic taste and style than Brechts.

Brechts is located in the heart of Berlin right at the shore of the Spree and next to world-famous Friedrichstrasse.

For the extra twist and special taste the Wiener Schnitzel is fried in lemon-butter and served with a very tasty potato salad and cranberries. Such a great combination! 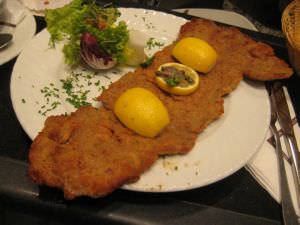 –Update: Right now KaDeWe is not offering any Schnitzel. We could not believe it ourselves.

Whatever they have been thinking when remodelling the food area we don’t know.

But we definitely hope they will get enough bad feedback to put their Wiener Schnitzel back on the menu. End Update–

If you only have time to try one of our top picks while in Berlin make sure it is the Wiener Schnitzel at KaDeWe.

Of course the Wiener Schnitzel is made of a very thin piece of meat and coated in a fantastic mixture of egg, flour and bread crumbs.

One can only guess what kind of bread crumbs they use, but what we already have seen is, that while the cook is preparing the tender piece of meat, he is using some special kind of (olive?) oil in vast quantities, while the Schnitzel is on the grill.

In case you fancy a burger over some Schnitzel make sure to check out our list of the best Burgers in Berlin. Guten Appetit.