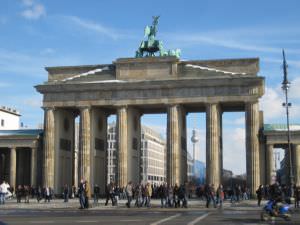 Berlin is the capitol of Germany (since 1990 following German reunification) and has a population of 3.5M people.

Berlin’s economy is mainly based on the service sector due to being one of the most popular touristic destinations in Europe.

Other industries include IT, pharmaceuticals, renewable energy, biomedical engineering, and biotechnology.

Lately Berlin also is the epicenter for new and successful startups and sometimes is referred to as Silicon Allee (deriving from the original Silicon Valley in the U.S).

Berlin climate can be best described as a humid continental climate.

In summertime it can get incredibly hot and the whole city seems to flee to the nearby lakes for some cooling down.

If you are lucky you will catch a very hot and dry summer with many hours of sunshine a day.

After living in Berlin for several years now I can assure you that at least every 4-5 years the summers in Berlin are fantastic.

That means on the other hand that the other summers can be very short and rainy.

Also be aware of the fact that in wintertime temperatures can go below -20°C (or -4°F). The weather in this time of the year is influenced by the cold climate coming from Siberia.

Yes you heard right, Siberia as in the very cold place that is part of Russia. So better bring heavy winter gear if you want to stay warm and cozy in winter.

Located in the eastern part of Germany Berlin is an important hub to the Eastern European states like Poland.

Berlin is relatively flat and its biggest river is called Spree. In the Western Berlin borough Spandau the Spree meets the Havel.

In this area there are many of the lakes like Wannsee and Tegeler See. But also if you take the S-Bahn direction East you will soon find yourself in the middle of great nature and lots of nice lakes that invite you to jump in and cool off during summertime.

Although many people would refer to Alexanderplatz being the city centre, there is no real city centre in Berlin.

Rather Berlin has a lot of “Kieze” which are little communities of their own within Berlin.

For more information on all the different neighbourhoods in Berlin just continue reading.