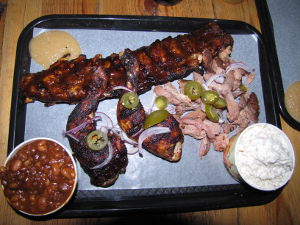 If you are from the US and love Spare Ribs you might have been disappointed in the past in Berlin.

Berliners don’t seem to have the patience to make awesome Spare Ribs.

Well at least this was the case in the past.

Nowadays there are some decent places in Berlin where you can get some awesome Spare Ribs just the way you know them from back home.

Even though Spare Ribs are not as popular as burgers right now, if you know where to go you will get finger licking good Spare Ribs even here in Berlin.

All Spare Ribs places in Berlin on a map

Just opened recently and already known for having some of the best Spare Ribs in town.

Salt n Bone is an awesome place to go in the evening, enjoy some of their carefully selected craft beers and some super juicy Spare Ribs.

Yes we know that a full rack including some sides for around 20€ sounds a lot, but once you see the plate in front of you with a neverending rack of the tastiest Spare Ribs ever you will know that you just made a very good deal.

If we would need to pick a favorite place in Berlin for the best Spare Ribs we would go for Salt’n’Bones.

Runners up for the best Spare Ribs in Berlin is Chicago Williams BBQ.

If you have never been to Chicago Williams you will have missed something.

Once you enter the Chicago Williams team will make you feel like a friend who hasn’t been around in a long time.

When ordering at the counter you will get some of the best corn soup we have ever enjoyed in our lifes.

And when the Spare Ribs are delivered to your place with a dip of apple puree on the side you feel like in Spare Ribs heaven.

Compared to Salt’n’Bones we would say the Spare Ribs at Chicago Williams are a bit smaller, but what they lack in size they make up for it in taste.

So if you are up for some very tasty Spare Ribs around Berlin Mitte we definitely recommend dropping by at Chicago Williams.

Continue reading here if you want to know more about Chicago Williams BBQ and their fantastic dishes .

For all those Berliner who think if we made a mistake here, as Yumcha Heroes is famous for their fantastic dumplings, don’t worry.

Yes, we really mean Yumcha Heroes at Rosenthaler Platz as a place where to get fantastic Spare Ribs.

As far as we remember their Spare Ribs are glaced in a mixture of honey and ginger sauce, which give them a unique asian style taste. Absolutely fantastic!

Keep in mind that only Yumcha Heroes at Rosenthaler Platz serves these delicious Spare Ribs.

There is a second branch located at Dunckerstrasse, which is as far as we know the place where all dumplings are prepared. But at Yumcha Heroes at Dunkerstrasse you will really only get dumplings. 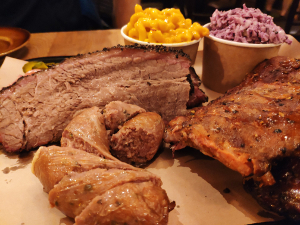 And slow cooked ribs are part of each Texas BBQ – no question about it.

All of their ribs and other meats are slowly cooked and smoked in their own big heavy smoker.

Add a great tasty BBQ sauce on top of the very tender meat that almost falls off the bone and you get some of the best ribs there are.

If we remember correctly they even offer every Friday and Saturday some beef ribs – looks like we need to return soon again to sample them as well. 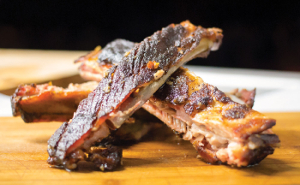 If you are looking for some awesome Spare Ribs around Moabit look no further.

There is no way around Pignut BBQ!

Pignut BBQ is closely tied to the success of the Arminiushalle in Moabit as one of the top destinations in Berlin for all Foodies.

Apart from the juicy and tender meat straight out of their Hickory Smoker we can recommend Pignut for their awesome selection of tasty sauces.

Maybe you are not a Ribs person that’s ok. In this case you might be interested in checking out the best burgers in Berlin or where you can get the best Schnitzel in town.

Unfortunately Berlin has been hit as hard as other German cities by the Corona Virus.

Right now many new regulations are in place that aim to slow down the spread of the Corona Virus.

Please be considerate and avoid public gatherings with more than 2 people (who can be your family or roomates but not your friends), keep 1,5m distance at any time, also when shopping groceries and avoid shaking hands.

This social distancing will help us all to get this over with quicker.

Remember to wash your hands at least 30s to kill the virus and stay healthy!

Soon this will all be over and we will be enjoying life outside in the sun and with friends again.