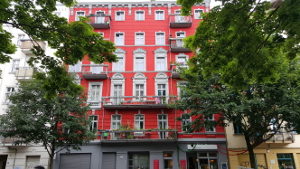 Berlin is divided into 12 different neighbourhoods, with each of it having its own vibe and feel.

No matter if you are a student looking to party or a family looking for a quiet neighbourhood, Berlin has a place for everybody to feel at home. 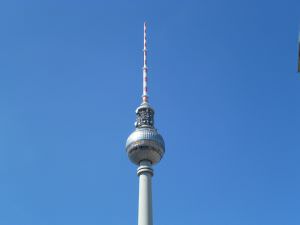 The Mitte district in Berlin is probably the most interesting place in the whole of Europe when it comes to recent history.

From Brandenburger Tor, to Reichstag, to the Jewish Memorial, there is so much history that it is almost impossible to cover all of it.

But Berlin Mitte is not stuck in the past. If you are interested in shopping, you will find the most expensive and exclusive brands and shops around here.

The area around Hackescher Markt is famous for little upscale boutiques, while Unter den Linden is home to major brands like Nivea, Microsoft and Volkswagen.

Most of Berlin’s fast growing start-up scene is located around Torstrasse, also known as Silicon Alley.

If you want to see today’s tech pioneers, make sure to find a place in cafes like St. Oberholz, and watch the armada of hipsters with their Apple Macbooks and Ipads discussing their newest business ideas over a cup of Chai Latte.

And last but not least, Berlin Mitte also offers a wide range of interesting restaurants.

If you are looking for the best steak in town, you will find yourself between movie stars and local celebrities at Grill Royal.

If you feel like Asian food make sure to pay Monsieur Wong a visit (also lots of hip people there), or if you haven’t made up your mind yet, then just wander around the area between Hackescher Markt and Alexanderplatz and you will surely find a great spot to grab a bite. 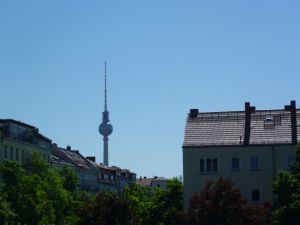 Prenzlauer Berg is fast becoming the most family oriented neighbourhood in Berlin.

It is famous for the vast amount of young families living in the area.

If you go for a walk around on a Saturday afternoon, you will see more babies than in any other neighbourhood.

The reason new hip parents choose to move to Prenzlauer Berg is that it is clean, safe and there is an inviting atmosphere for children and a full range of activities for mummies and babies, from pre-natal yoga to playgrounds in every corner.

Prenzlauer Berg is also popular for its health food scene, with more organic food shops and vegan cafes than any other neighbourhood.

But if you are into eating steak and you don’t know what all the different recycling bin colours are for, don’t worry.

Prenzlauer Berg hosts many restaurants and bars where you can have a delicious steak (check out Vila Rodizio – South American meat heaven) and enjoy a drink with your friends in an chic, fun and trendy environment. 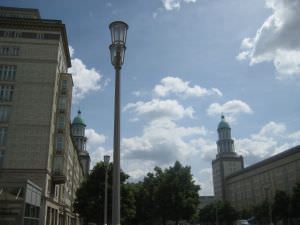 Friedrichshain is a great choice of neighbourhood if you are looking to have a lifestyle packed with fun and outings when you move to Berlin.

It is suitable for those who are looking for a lively atmosphere, as the party never stops in Friedrichshain.

However, there are also some spots where you can enjoy peace and quiet, while being close to public transport and supermarkets.

Friedrichshain has a young population, which is not surprising given that the rents are cheap, there is a huge amount of cool places to hang out and wherever you live in the neighbourhood, the party scene is just a few steps away. 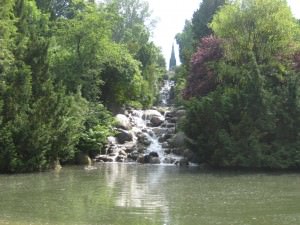 Kreuzberg is the ideal place to live for those who enjoy being part of a varied culture scene.

Riddled with artists, students and foreigners, Kreuzberg will never be boring.

You will always find a new cuisine to try, an art exhibition to check out or a special night in a bar where you can salsa the night away.

Kreuzberg is also packed with clubs, with most of them being only a couple of stops away by train.

If nightlife isn’t your thing, Kreuzberg can still be a good choice for you, as it also offers beautiful homes at much lower prices than in other neighbourhoods. 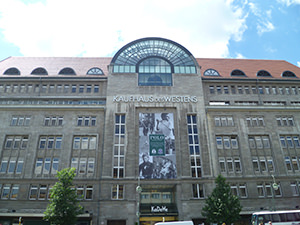 Many people who visit Berlin will say that Charlottenburg does not feel like Berlin.

This might be partly true as Charlottenburg is cleaner, more organized and probably more boring than the rest of Berlin.

But Charlottenburg is probably the heart of West-Berlin and also home of the famous Kurfürstendamm and KaDeWe.

Kurfürstendamm is, along with Unter den Linden, the most exclusive shopping street in Berlin. It is not surprising that Apple has opened its new Apple Store recently on Kurfürstendamm.

The new Apple Store is now neighbours with other exclusive brands, such as Gucci, Chanel, and Budapester.

If you are around Charlottenburg, make sure you pay a visit to KaDeWe – especially their incredible food court, located on the top floor of the beautiful building.

Whether you feel like eating the best Schnitzel in Berlin or having an exclusive piece of Kobe beef, the food court at KaDeWe will blow you away.

In the unlikely case that you could not find what you were looking for at KaDeWe, then the Europa Center or the big shops around Tauentzienstraße would be your next best stop.

Also Charlottenburg is home to the famous Kantstraße with hundreds of Asian restaurants.

If you are into Asian cuisine then you need to visit one of the countless restaurants there such as Lon Mens Noodle House.

Neukölln will go through the same process as Prenzlauer Berg did years ago already.

Traditionally Neukölln is home to a very big Arabic and Turkish community, which gives this neighbourhood a very exotic touch.

In recent years many new-Berliners discovered Neukölln as a great place to live, as rents are still comparably low and the nightlife is almost unmatched.

Make sure to take enough time to explore this neighbourhood in Berlin and enjoy the multi cultural feeling in Neukölln.

Have some baklava and tea in one of the many cafes, enjoy some of the best restaurants (BBI – Berlin Burger International) in Berlin or just watch people passing by – Neukölln is the perfect place to do all of that. 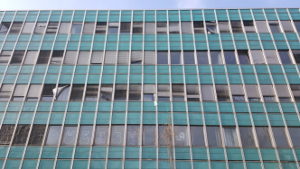 One of the former Eastern Berlin areas and still today Lichtenberg cannot deny its Eastern heritage.

Lichtenberg is home to countless of the typical Eastern German Plattenbauten, which are basically massive building blocks that have been hip in the past but nowadays look a little bit outdated.

However Lichtenberg has its own style and is also e.g. home to the Dong Xuan market where you will find anything from plastic gadgets to authentic Vietnamese cuisine, cheap haircuts and fresh flowers. 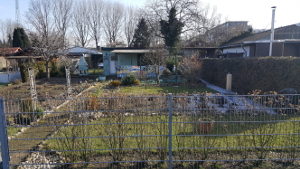 Both Marzahn and Hellersdorf are at a first glance very similar to Lichtenberg.

You can clearly see again the Eastern German heritage, which are blocks after blocks of Plattenbauten.

But Marzahn e.g. is also home to the famous Gärten der Welt, which is great park to get away from all the noise of the city.

Even the Internationale Gartenausstellung 2017 was hosted there. So keep an open mind when visiting Marzahn and Hellersdorf and you won’t be disappointed.

One of the least know neighbourhoods of Berlin – Reinickendorf – but almost every tourist or local has been there at least once as Flughafen Tegel is located in Reinickendorf.

Also Reinickendorf is know for a lot of Plattenbauten, but if you take the time to explore the area you will find a lot of nice spots such as Tegel and the Tegeler See (lake).

When taking the U6 to the last stop Tegel and walking down the main road towards the lake you feel like being on vacation (at least when the sun is shining). 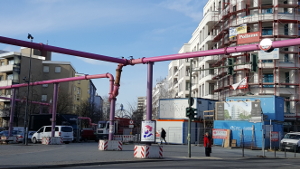 When Berliners are talking about the old West-Berlin districts most of them will talk about Charlottenburg as it was the busiest neighbourhood with KaDeWe and Kudamm.

But many of them used to live in the districts Steglitz and Zehlendorf and they still do.

Neither Steglitz nor Zehlendorf transformed (or were being gentrified) into yet another district full of hipster coffee shops and hords of tourists.

So if you are looking for a quiet neighbourhood to live in with your family give Steglitz and Zehlendorf a try.

Also a big plus if you need to drive with a car for your job a lot you are quickly on your way South and West without being stuck in traffic.

Tempelhof is most famous for the now closed city airport Tempelhof which played a crucial role during the Sovjet blockade of West-Berlin in Cold War times.

Countless American planes started and landed each day in order to bring in food and other supplies to West-Berlin.

Nowadays Tempelhof is one of the most famous locations for Berliners to hang out during a day off and do sports like kiting or skating.

Schöneberg used to be the cultural hub of West-Berlin with many famous stars such as David Bowie living and recording their albums there.

Nowadays you can still feel the special and tolerant vibe of Schöneberg, especially around Nollendorfplatz with all the gay bars and sex shops. 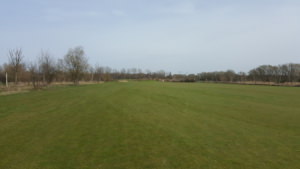 If you want to be a true Berlin you should quickly learn that Berliners make fun of Spandau and don’t count it as part of Berlin.

But nevertheless Spandau is a great place to live with nice nature and many lakes just a stone throw away.

Furthermore the Spandau Zitadelle is a very famous location for concerts and other cultural events.

And best of all there are trains taking you to Berlin Alexanderplatz and Friedrichstrasse in less than 20 minutes. 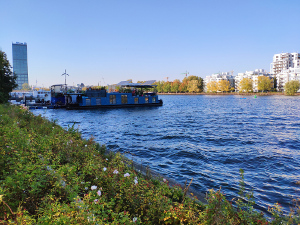 Treptow and Köpenick are also great neighbourhoods for families to live in.

Treptow has a more Berlin-feel with the vicinity to Kreuzberg/Friedrichshain/Neukölln but at the same time you will have a lot of green spaces such as the Treptower Park.

In fact Treptower Park is one of the best parks in Berlin.

It is so wide that you will always find enough space even playing frisbee, you can enjoy Berlins skyline and you are next to the Spree. So what more can you ask for in a park.

Köpenick however is even greener and more relaxed than Treptow.

In summer Köpenick makes for a great day-trip destination with all the lakes and restaurants around.

Once you decided which neighbourhood in Berlin suits you best it is now time to think about all the things you can do in Berlin. 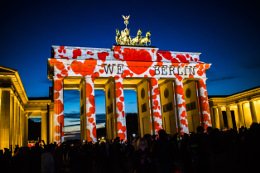